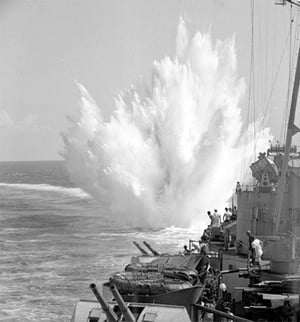 In the distant past 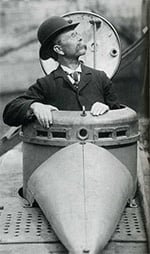 there was no way to detect an underwater craft, and once a submarine dove beneath the surface it vanished like a ghost. John Holland who designed the US Navy's first commissioned submarine, wrote in 1900 that "the submarine is indeed a 'sea-devil,' against which no means we possess at present can prevail." Early ASW tactics depended to a great extent therefore, on the use of static defenses such as underwater mines, and chain-link nets to prevent the movement of subs into secure areas. Torpedo nets were also hung from ships as an anti-sub defense to block torpedoes from reaching their hulls. Typical of the ever-evolving tactic/counter-tactic nature of ASW, subs began countering torpedo nets by adding net cutting blades to the front of their torpedoes.

Ships would also optimistically try to damage submarines by towing grappling hooks connected to explosive charges in the hopes of snagging a sub, or throwing charges overboard in the direction of a suspected vessel. The use of smoke screens to obscure ships was also widely used. 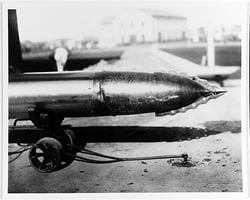 In general, forcing a sub to surface and attacking the periscope was the objective of most offensive tactics. Many desperate and unusual schemes were considered, including spraying the sea with paint or oil, which would then stick to a sub’s periscope as it surfaced, blinding the sub. Another involved training birds or sea creatures to identify or hinder subs. Yet another proposed tactic was to send multiple small rowboats searching for surfaced subs, so men waiting in the boats with sledgehammers could then smash the exposed periscopes.

At the start of WWI, about the only offensive tactic to combat subs was to simply wait for them to surface and then attack them as you would a ship. For a while anti-submarine warfare was simply an extension of existing ship-to-ship combat tactics. Subs needed to surface often to navigate, confirm targets, or to resupply, and surface ships would then attack using cannon fire or ramming as they would against any vessel. In 1914 one of the first successful anti-submarine attacks was the ramming of the German sub SM U-15, while it was surfaced with engine troubles.  The use of decoy "Q-Ships" also had some success against submarines. The Q-Ships were heavily armed anti-sub ships, disguised as vulnerable targets, and designed to lure submarines into making surface attacks. Once a U-Boat surfaced and got close enough, the Q-Ship would open fire and often surprise and overwhelm them. 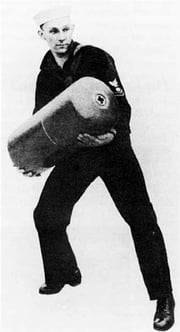 As submarines proved themselves to be a serious threat in WWI, more advanced ASW tactics were explored. An effective defensive tactic was the use of shipping convoys, where if one ship was attacked, all the others in the convoy would respond.  The main offensive weapon became the use of Depth Charges. Early Depth Charges (or “dropping mines”), used a cable attached to a surface float, which pulled a detonation trigger when the canister sank to the proper depth. These early US Navy Mark 1 Depth Charges weighed 100lbs, contained 50lbs of TNT, and were deployed by being thrown overboard above estimated sub locations.

Later models such as the Mark 2 (nicknamed the “Ash Can”) were detonated using a hydrostatic pistol controlled by water pressure to fire at a pre-selected depth. Towards the end of WWI variations of the Mark 2 (or Type D) Depth Charge were used, with an explosive charge of 300lbs of TNT and set to explode at a depth of between 40-200 feet. These heavy Depth Charges were set up on racks and rolled off the back of ships. 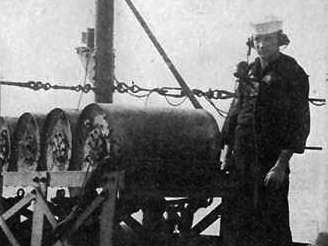 Simply waiting for a sub to show itself above water and behave like a surface ship was just not practical however. A solution was needed to the problem of finding subs before they attacked. Seaplanes and balloon airships (blimps) were used to spot surfaced subs from afar, but could not destroy subs and could not detect subs below the surface. When the USA entered the war in 1917, the US Navy began work on an innovative echo-ranging technology (then called "supersonics"), which would finally provide a means for underwater submarine detection.

Another emerging ASW technology from WWI was the use of Indicator Loops, where metal cables placed on the sea floor would detect an enemy sub’s magnetic field. As a sub was detected by the loop, mines close to the loop would detonate and sink it. The loop proved effective, and was used to sink the German sub UB-116 as it attempted to enter a UK harbor.  The anti-submarine indicator loop was used through the end of the war and into the start of WWII, as part of the first modern anti-submarine harbor defense system.

After WWI anti-submarine warfare continued to develop. The Navy kept up its efforts to improve Depth Charges, and developed forward-throwing anti-submarine weapons. As submarines became able to dive to greater depths, larger charges were used which could detonate even deeper. The defensive tactic of shipping convoys and escort ships was expanded, and was countered by the use of submarine coordinated attack groups (or Wolfpacks), which could overwhelm escort defenses.

The use of active sonar (ASDIC) could now detect the acoustic signature of a sub, and a range recorder was developed to provide a target position. The combination of Sonar technology to locate subs and Depth Charges to then destroy them, became the foundation of anti-submarine warfare. While static Indicator Loops were still used to warn of submarine activity in fixed areas, Sonar and Depth Charges allowed the Navy to begin hunting for enemy subs. 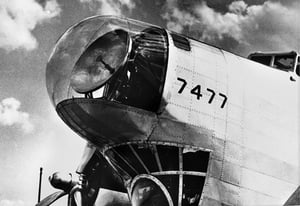 Aircraft also began the role as sub hunters and were fitted with anti-sub weapons such as the FIDO (Mk 24 'mine') air-dropped homing torpedo.  These 'smart' torpedoes achieved a combat effectiveness of about 22%, compared with about 9% for Depth Charges.

Aircraft radar also evolved to became one the best ways to hunt submarines. Towards the end of WWII radar equipped aircraft is credited for most of Allied kills against U-Boats. Enemy submarines had great difficulty seeing the planes above them until it was too late. In addition, the Navy began to develop Hunter-Killer tactics where combined groups would work together to actively seek and destroy enemy subs.

Another important factor in anti-submarine warfare, was the breaking of enemy’s Enigma communication codes. Having intelligence on sub locations and plans greatly improved the ability of the US Navy to hunt and destroy enemy U-boats.

The Axis Powers were less successful at ASW, partly for technological reasons, partly for lack of ASW skills, but also because they underestimated how deep US Navy subs could dive. Unfortunately, this piece of military intelligence was made known to them as a result of the May Incident in 1943, where a politician revealed sensitive information to the press.

ASW During the Cold War

The value of a strong submarine force became apparent during WWII. During the Post-War period, the super powers continued to develop their Naval capabilities. Submarines became faster, quieter, more maneuverable, and were able to stay submerged for longer periods of time. As subs became stronger and stealthier, they were better able to operate independently, and the WWII tactic of group Wolfpacks was no longer needed. The later development of nuclear submarines capable of carrying ballistic missiles, made the advance of anti-submarine warfare techniques a top priority.

A new generation weapons was developed to destroy submarines. The use of Depth Charges basically ended during this period, and was replaced by more sophisticated guided torpedoes, such as the Mark 48. These acoustic torpedoes find targets by listening for their characteristic noise signatures using active or passive sensors. Later versions included wire guided torpedoes, which received steering commands via a metal communication wire. More recently the metal wire was replaced by optical fiber, which can transmit much more information. Communication between a wire guided torpedo and a ship is useful after launch, to confirm the torpedo is on the proper intercept course. As these torpedoes acquire a target however, they switch over to an internal guidance system and the wire is cut.

There were also many improvements in identifying submarines hidden below the ocean surface. New technologies in acoustic detection meant that subs where no longer invisible sea-devils. Global listening systems such as the SOSUS (sound surveillance system) were developed, which used sea bottom mounted hydrophone arrays connected by underwater cables to facilities ashore, to detect submarine positions by triangulation. Acoustic interceptors such as sonar-bouys were also developed, in addition to towed passive devices such as the Magnetic Anomaly Detector (MAD), which can accurately track large metallic underwater objects. The photo below shows a US Navy SH-60B Seahawk Anti-Sub Helicopter, equipped with a "MAD- Bird" device. 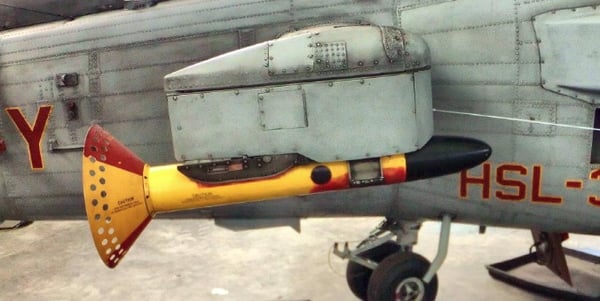 As each new generation of submarine becomes quieter and harder to detect, the sensing technology used in ASW has in turn improved. If a submarine cannot be seen or heard, then it can’t be found, attacked and destroyed.  Sub hunting torpedoes have followed suit and have now also become quieter and harder for submarines to detect and avoid. 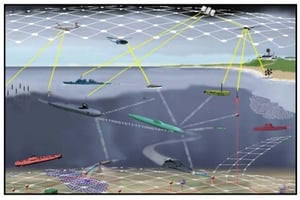 Today warfare against submarines is carried out by an inter-connected network of surface ships, aircraft, and other submarines. Intelligence, surveillance and reconnaissance (ISR) continues to be the foundation of ASW, and is accomplished through an array of sensors used to detect and track the acoustic activity of enemy subs. The US Navy's Advanced Deployable System (ADS) is a good example of a modern acoustic undersea surveillance system. Pervasive awareness of the battlespace, using a network centric approach to the battlefield is the goal.

As the Navy launches its new generation of Virginia-Class Submarines, and plans to build the Columbia-Class, it is also advancing future ASW projects. Recent developments in Naval drone technology may lead to a new era of anti-submarine warfare, where sub hunting robots could take the lead in patrolling the seas.  Work is already well underway to deploy unmanned surface ships such as the Sea Hunter ACTUV, as well as swarms of AUVs (Autonomous Underwater Vehicles) which could be used to hunt and maybe even destroy subs.

A new era for submarines has arrived. Advances in technology will continue to make subs stealthier, and detection systems more effective, in the ongoing evolution of anti-submarine warfare.