On land, creatures mainly rely on sight to hunt and detect danger. An eagles’ sharp eyesight is the best in the animal kingdom, and allows it to see prey over 3 kilometers away. Under the sea visible light waves are limited however, and they practically disappear at greater depths. The ability to listen and detect sound waves is therefore one of the most effective ways to sense moving objects. In the Deep Sound Channel (DSC) for example, at depths around 1,000 meters low frequency sound can travel thousands of kilometers before dissipating. Whales communicate using the DSC, and can send and receive messages across entire oceans.

In a comparable way, submarines use acoustics to interact with their underwater world. Using Active Sonar (sound navigation and ranging), vessels emit a pulse of sound (pings) via a transmitter (transducer), then listen for the reflections (echoes) of the pulse. Echo data is collected and interpreted to detect and identify objects. Active Sonar is a way for the submarine to have a dialogue with its surroundings, to voice questions (pings) and receive answers (echoes). Sometimes though, a sub does not want to be heard, and just wants to listen. In these cases, it uses Passive Sonar to quietly detect noises, especially of other submarines. 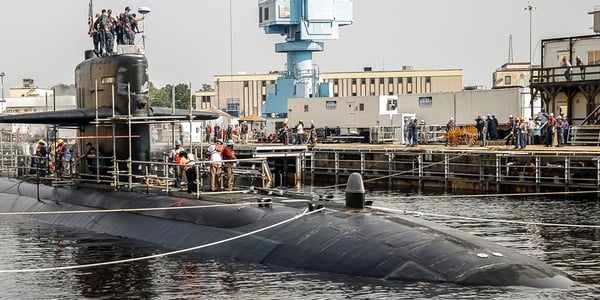 The use of passive sonar is also known as Acoustic Intercept sonar, as it does not emit any signal but only intercepts sound waves in the area. Intercept systems can warn of enemy activity in the area, ranging from hostile subs, to torpedoes moving through the water. Most modern submarines have passive sonar listening systems in the bow, along the hull and behind the sub. Due to the noise made by propulsion systems, the sonar behind the sub is towed on a long cable. 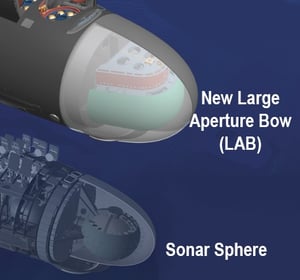 In the newest U.S. Navy Virginia-class submarines, the bow sonar is called LAB (Large Aperture Bow) and is horse-shoe-shaped. The LAB sonar replaces earlier sonar spheres, which were located on the front bow dome and surrounded by air. To improve the Acoustic Intercept sonar’s listening ability, the bow dome is now filled with water and is made with special composite materials to improve the transfer of acoustic signals. In addition to bow sonar, submarine hulls feature the new LWWAA system (Light Weight Wide Aperture Array) for advanced acoustic detection. The LWWAA system is based on fiber-optic arrays, and updates earlier hull masts that used ceramic hydrophone sensors.

The new generation of submarines are both quieter than ever, and are becoming even better listeners. The latest versions of acoustic intercept and countermeasures systems (the AN/WLY-1), will help Virginia-class submarines hear threats sooner and react to them faster than ever before. The fact that U.S. Navy submarines have become the best "listeners" among all subs, is another reason why they remain in command of the undersea world.