The Dreadnought Class of Submarines 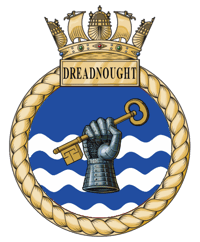 The word “dreadnought” (or dreadnaught) dates back to the late 17th century, where it described a fearless warrior- one who dreaded naught. This moniker was later given to the first modern battleship of the early 20th century, the Royal Navy's HMS Dreadnought, one of the most fearsome naval warships in existence when launched in 1906. The HMS Dreadnought battleship featured the absolute latest in naval innovations of the time, namely a new steam turbine propulsion system, and unprecedented “all-big-gun” firepower, delivered by a plethora of heavy-caliber guns.

The Royal Navy will soon launch a new class of Nuclear Ballistic Missile Submarines (SSBNs) as the successor to its current Vanguard-Class subs, and in 2016 appropriately named it the Dreadnought-Class. Like its battleship namesake, the Dreadnought-Class of SSBNs will feature the cutting-edge of naval propulsion design, incredible firepower, as well as several features that will make it unique even among other modern submarines.

The Dreadnought-Class is being constructed at a special time in history. For the first time ever, three major allied countries are concurrently designing and building their new generation of SSBNs. The US Navy recently conducted a keel laying ceremony for the Columbia-Class, the Royal Navy’s Dreadnought Class is under construction, and the French Navy (Marine Nationale) is scheduled to begin cutting steel for its SNLE-3G sometime next year. This serendipitous occasion is allowing the US, the UK and France to not only learn from each other’s designs, but in some cases to actively share mutually beneficial components, thereby improving naval relations and efficiencies in the future. 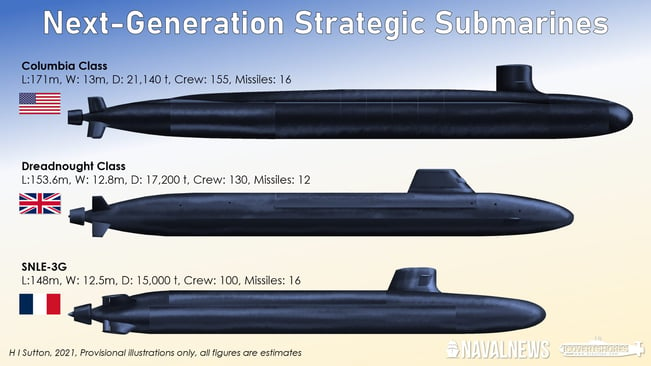 The Dreadnought was primarily designed by BAE Systems alongside its partners Rolls-Royce and the Submarine Delivery Agency (SDA), which together form the Dreadnought Alliance. As noted on the BAE website, “BAE Systems is the lead for the whole boat build and secondary propulsion and is the platform technical authority on the Dreadnought programme, which will deliver four new submarines for the Royal Navy and replace the current Vanguard class.”

The submarine is under construction at the BAE Barrow-in-Furness shipyard in the northwest of England, with the nuclear propulsion systems built by Rolls Royce Submarine division in Derby. Similar to the U.S. Columbia-Class and the French SNLE-3G, the Dreadnought-Class will use an X-Form Rudder system for greater control, a quieter Turbo-Electric drive, and a Pump Jet propulsor for improved power with a lower acoustic signature. Unlike the other two submarines, Dreadnought has a relatively elongated and streamlined sail (fin) in the front third of the sub, as well as Bow planes (fore planes) instead of Sail planes (Fairwater planes). These Bow planes will most likely be retractable for berthing the boat alongside a dock, or maneuvering at high speeds or when surfaced.

The Dreadnought is powered by the new PWR3 Pressurized Water Reactor, which is a great improvement on the PWR2 used on the Vanguard and Astute class. The PWR3 system is based on a US design but uses UK reactor technology. The PWR3 has a simpler and safer design with a longer life and lower maintenance requirements than the PWR2 variants, at roughly the same through-life cost. The PWR3 also has 30% fewer parts compared to the PWR2. Its simpler design requires fewer coolant pumps, making it significantly quieter.

One of the most interesting features of the Dreadnought-class submarines, will be its unique spin on a “double-hull” design. Modern U.S. submarines, including the new Columbia Class sub, use a single-hull design and have a distinctive cylindrical shape with a rounded front. These single-hull designs have only one layer of steel, which uses reinforcing rings (or frames) on the inside of the hull for added strength.

Using a double-hull can be useful to cover inconsistencies in the streamlined characteristics of the outer surface of the sub. For example, many double-hulled subs have their reinforcing frames on the outside of the inner hull, which are then “smoothed out” by using an additional hull cover. In other subs, the inner hull has a varying diameter or other odd shape design, that an outer hull form strengthens and makes more hydrodynamic.

Unlike the Russian double-hull design however, the Dreadnought’s outer hull is much lighter and not designed for strength. Also unlike other double-hulled subs, the reinforcing rings will be on the inside of the inner hull, like in the single-hulled Columbia. The Dreadnought-class submarine seems to mainly use its double-hull for a new reason, namely the important element of stealth.

The Dreadnought’s second hull is engineered as a thin extended shell that covers a regular cylindrical inner hull. This thin outer hull is specially shaped with sloping sides that extend right down the hull instead of being limited to the upper hull. Some might consider the Dreadnought to be a single-hull sub with an "extended casing"; without an actual second hull. In any case, the special angled-shape of the hull/casing should allow the Dreadnought to better deflect incoming active sonar, much like a stealth fighter plane. Some have also speculated that the extended casing creates a bio-inspired hull shape (BHS), and by changing the shape of the bow dome from a traditional sphere, to a more organic "whale-inspired" design, the sub might achieve better performance.

Having larger flat surfaces will certainly make it easier to coat the submarine with anechoic tiles, which lower a sub's noise profile. The area between the two hulls could also contain materials to further lower the sub's acoustic signature. Furthermore, in theory the space between hulls could serve as a convenient platform to store and launch future devices such as UUVs or other countermeasures yet to be developed. 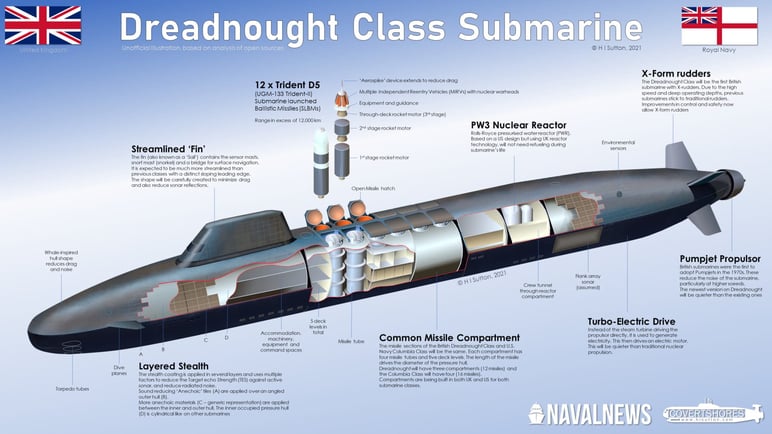 As part of a unique agreement between the US and UK in 2008, both the Dreadnought and Columbia class have been designed to share a Common Missile Compartment (CMC) system to hold Trident II D-5 missiles. This four-tube module system, also known as the "Quad Pack", reduces costs for the submarines and is relatively easy to drop into each sub. The Dreadnought will hold 3 Quad-Packs and the Columbia 4 Quad-Packs. The CMC is expected to be used for at least the first portion of the subs’ respective operational lives.

In addition to the missile tubes, the CMC program also provides systems to support the missiles and the launch equipment, including power, cooling, gas venting, and launch hardware and software. 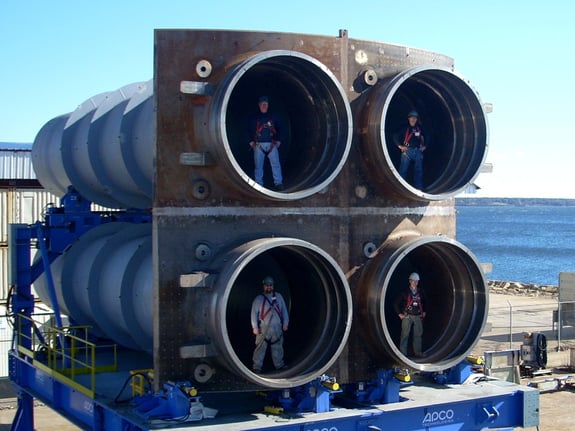 In addition to four 533 mm torpedo tubes for Spearfish heavyweight medium-range torpedoes, Dreadnought submarines will have twelve SLBM launch tubes, housed in three Common Missile Compartment (CMC) "Quad-Packs".  The Dreadnought might use only two Quad-Packs for SLBMs, but potentially could use them all and be armed with twelve (12) Trident II D5 missiles as part of the UK Nuclear Deterrence Policy and mission to provide a Continuous At Sea Deterrence (CASD). The Trident D5 missiles were designed in the United States and are also carried by both the US Ohio class ballistic missile submarines and the new Columbia-Class. Each Trident D5 missile will carry eight (8) Thermonuclear MIRVs (Multiple Independently Targetable re-entry Vehicles), but could hold up to 12 MIRVs. So that's a potential 12 (missiles) * 8 (MIRVs each) = 96 W88 thermonuclear warheads per SSBN. Each W88 has an estimated yield of 475 kt (kilotonnes) of TNT, which is enough firepower to potentially destroy any major city and most of the surrounding area in a 7-mile (11.2 km) radius. This is a fearsome amount of firepower per submarine, especially when you then multiply that by up to four Dreadnought class subs which could be on patrol at any time.

The Dreadnought is designed to have a service life of 35+ years and has added some lifestyle options that would have been unimaginable to previous generations. Serving aboard an SSBN on a regular patrol that may last three months or more, can get a bit tedious at times. Indeed, as the sub does not need refueling and makes its own water and oxygen, the main reason for coming back to port at all is to stock up on fresh food and other perishables for the crew. The Dreadnought will hopefully make the Silent Service more enjoyable during its long voyages, by providing an improved sickbay, separate female crew quarters/ toilets/ showers, a classroom/study area, and a modern gym facility that includes: exercise bikes, rowers, running machines, a cross trainer, and weight benches.  In addition the sub will introduce an innovative new lighting system that simulates night and day conditions, making it easier for the crew to get used to normal life after being submerged for months at a time.

The UK Ministry of Defense (MoD), which received approval for the names from the Queen, said the next three boats would also be given names with "historical resonance". The Dreadnought-Class submarine names will be: the HMS Dreadnought, HMS Valiant, HMS Warspite and the HMS King George VI.

As of 2018, the MoD expects the first submarine to enter service in the early 2030s, with the Columbia-Class scheduled for 2031, and the French SNLE-3G around 2035. In addition to delivering an important long-term deterrent to safeguard each country, building these submarines is creating immediate employment for the people and companies that possess the needed skills. It takes an incredible number of local welders, metal workers, and so many others to build one of these wonders of technology. Each Dreadnought-Class submarine will need over 42km of piping, more than 347km of electric wiring, and is projected to sustain almost 30,000 jobs across the UK for years to come.

Deciding to participate in the enormous undertaking of producing submarines takes courage, tremendous foresight, and the ability to make key investments in the future. In the UK, the Dreadnought programme has been called "The Challenge of a Generation". Only the fearless would dare to undertake a massive project such as the Dreadnought, but as the SAS motto declares, "Who Dares Wins". There is no doubt, that the Dreadnought will prove to be a huge win for the United Kingdom over the next few decades.

Globe Composite Solutions for Defense, Submersible, and Marine Use