Ever since Skynet unleashed a few Terminators, robots in general have been stereotyped as unfeeling metallic brutes. Recently however, we have started to see the softer side of robots. I don't mean humanoid-looking robots like Sophia, the first robot to gain citizenship from a country. I am referring to the new field of Soft Robotics, which produces machines more physically sensitive to humans and the world around them.

Advances in Soft Robotics are taking many forms. Some engineers are designing soft robots that mimic living organism’s ability to move through our complex physical world. Other designers are focusing on enabling robots to better interact with humans and other living things. Both soft paths however are based on using new compliant materials, made of innovative combinations of polymers, elastomers, polyurethanes, as well as composite materials.

A soft robot’s polymer “muscles”, are usually extended using air or a liquid to inflate a hollow structure or bladder. By inflating and deflating elastomer compartments, movement is achieved. First one section of the robotic invertebrate is activated to reach forward, then it deflates as a second section is used. The lack of any skeletal structure allows these soft-bodied robots to crawl under or through otherwise unpassable areas. 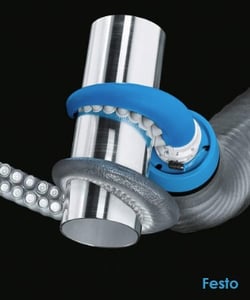 Some of these soft robots are given more specialized functionality by using specially engineered polymers. By combining polymers with different stiffness values, or by including pleats in a design, objects can be engineered to move or bend in prescribed ways. For example, a soft silicone structure can be made that bends in a certain way when inflated, mimicking a finger’s gripping motion or the wrapping ability of a tentacle.

One soft octopus inspired tentacle not only uses a pneumatic-based limb, but further increases its abilities by using air powered suction cups to hold items. The OctopusGripper is also a good example of a Cobot (collaborative robot), which is strong  while still being safe to use around humans due to its soft touch.

A different kind of non-skeletal robot was created by Mechanical Engineers at Stanford University. This novel soft robot seems more plant-like in its motion, and “grows” like a vine. Similar to a vine, it has a base from which a tendril continues to extend and move around obstacles. New length is added to the vine using an eversion process, by feeding additional length to the end of the tendril from the inside. Materials can then be delivered through the center of it, such as a camera or sensors. This system could be used in an emergency situation to provide water could to be  extinguish a fire, or send nourishment to a person trapped in a hard to reach location.

A Soft Touch
While a tough exterior is great for Industrial robots, many tasks are better left to a softer touch. Soft Robotics is not just about the mechanics of movement, but about how to better interact with organic life. The field of soft robotics includes advances that do not try and create totally squishy robots, but rather focus on making the robots touch much gentler. The Agricultural and Food industries have already made advances using robots with a softer touch.

Companies like Soft Robotics Inc. are perfecting robots that assist in workforce and supply chain challenges, by picking and placing even the most delicate foods without bruising, marking, or damaging them. In addition, advances in robot A.I. (artificial intelligence) now allow bots to identify good fruits and veggies, and pick them with a firm but soft grasp. See the SWEEPER agricultural robot in action below. This new pepper harvesting robot determines the peak time to pick and then gently harvests the vegetables without any human guidance.

The medical applications of Soft Robotics are also growing. The power of Soft Robotic muscles is being used in rehabilitation and assistive devices to help move human limbs. Special soft-robotic powered gloves or sleeves might be worn in the future to aid fingers to grasp or legs to walk. These wearable solutions are a non-invasive alternative to surgery and could provide immediate results. They could also be used to aid in the rehabilitation of muscles or as part of physical therapy during a post-surgery healing process.

Surgical uses for soft robotics are also being developed. Today most surgical techniques exclusively use metal devices to perform internal procedures. Manipulating hard-steel instruments inside and around soft tissue and organs can result in damage. Soft robotic devices may be the answer. A soft device might be better at navigating around soft tissue and gives a way to softly hold delicate organs with less danger of crushing or puncturing.

The Role of Composites
Composites are playing a key role in Soft Robotics. Flexible but strong composite materials are used to add even more functionality to a soft part. New composite “smart materials” are also being developed that rely on thermal energy to change their form. Shape Memory Alloys (SMA) change shape when exposed to heat, and “unfold” as they release of stored elastic energy. Electro-Active Polymers (EAP) are also being developed, which might one day result in polymer “muscles” that move as a result of electric stimulation. A number of Stimuli-Responsive Materials (SRM) may also become available in the future, which react to light, chemical, or other stimuli.

Rethink your Existing Product or New Project
Soft robotics is a mixture of plastic, chemistry, and mechanical engineering, that will undoubtedly continue to grow in the near future. Globe Composite Solutions has a team of chemists and engineers that are experts on polymers and creatively designing new or replacement parts. Globe is also well known for its ability to quickly produce functional prototypes. Whether you're designing a soft robot or thinking of introducing composites or new polymers to your next project, contact Globe Composite Solutions and discuss our total design and engineering solutions.