One of the easiest to use and most cost-effective scanning devices, is the hand-held detection wand. A hand-held detector allows security personnel to find hidden metallic objects that might pose a security threat. The hand-held metal detector does not emit radiation like an X-ray machine, it uses an electro-magnetic field (EMF) to detect metals.

Airport security also uses larger walk-through metal detectors, which allow for a faster security check. Like hand-held metal detectors, most of these security arches use similar electro-magnetic field (EMF) technology to determine if you have any metals on or in your body, and do not use X-rays.

An impartial multidisciplinary research effort was done by the World Health Organization (WHO), to determine the effects of EMFs on general health. The WHO website states:

"The WHO concluded that current evidence does not confirm the existence of any health consequences from exposure to low level electromagnetic fields. However, some gaps in knowledge about biological effects exist and need further research."

It seems that being exposed to the low-level electro-magnetic field created by a security wand is similar to other EMFs we experience in modern life. When you consider that EMFs are created by computer screens, electric blankets, refrigerators, and other beneficial items used around the home, exposure to another EMF through the use of a Security Detection Wand EMF seems justified. People who report a "hypersensitivity" to electricity or magnetic fields, or wish to limit their exposure can request a physical security pat-down instead.

More and more modern airport security now includes the use of full-body scanners, most of which either use Backscatter technology, or newer Millimeter Wave (MMW) technology. The use of both of these advanced walk-through security detectors has a number of advantages, and can quickly scan a person for many security threats. However, Backscatter scanners and Millimeter Wave scanners each use a different imaging technology.

The Backscatter scanner uses a parallel stream of low-energy X-rays radiation to scan passengers. A person stands between two scanning walls, which each have a radiation source, so that both the front and the back of the person can be imaged. The X-rays pass through clothing, bounce off the person's skin and any hidden objects, and then return an image to detectors mounted on the machine's surface.

A Backscatter X-ray scanner uses much less radiation than a medical X-ray that creates images of objects below the skin. However, while the Backscatter scanner only bounces X-rays off the skin, there are concerns regarding the amount of radiation they gave off, as well as privacy issues related to the sorts of images these X-ray scanners produce. Many people feel that the Backscatter X-ray image basically strips away clothing and shows very graphic images of a person's actual nude body, which is a violation of their passenger rights.

Due to both health concerns and privacy issues, in 2003 the TSA stopped using Backscatter scanners, and began replacing them with newer Millimeter Wave security scanners.

Millimeter-waves are part of the electromagnetic spectrum between radio and infrared waves, and therefore MMW scanners work differently than previous X-ray based systems and do not expose people to harmful ionizing radiation. A Millimeter-wave style security booth has a person enter an enclosure and raise their arms, while two transmitters spin around their body producing Millimeter Waves.

These waves of energy pass through clothing, bounce off a person's skin (or any hidden objects), and then return to two receivers. The receivers send the 360 degree image to a security computer, where sophisticated software algorithms analyze the data, create a 3-D image of the person, and identify any concealed objects. Because MMWs are reflected back in a different ways depending on the object they hit, items hidden under clothing are clearly seen.

To address privacy issues, the images security staff see are mostly converted to outlines and general shapes. In regards to health concerns over this method of airport security, the U.S. Food and Drug Administration (FDA) states that: 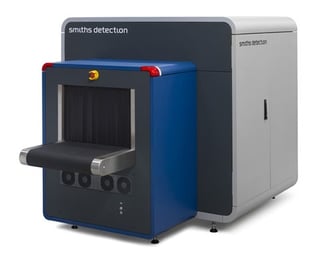 While the use of airport security X-ray scanners for people is becoming less frequent, X-ray Inspection Systems continue to be the main way to screen luggage and carry-on items allowed in airports and on planes. These "cabinet x-ray systems" use radiation shielding to protect security staff and passengers from the potentially harmful levels of x-ray radiation used to look inside of baggage and parcels. Manufacturers are required to certify that their X-ray Baggage scanners do not emit harmful levels of radiation, and that it is safe to stand or walk near a cabinet x-ray system while it is producing x-rays.

It is worth noting that checked luggage is exposed to much higher doses of X-rays than carry-on items. For that reason, any unprocessed film in your checked luggage may be damaged, and should be added to your carry-on items. Electronic equipment should not be harmed by routine airport X-ray scans. Regarding other personal items that have passed through X-ray Screening Systems, the U.S. Food and Drug Administration (FDA) reports:

"There are no known adverse effects from eating food, drinking beverages, using medicine, or applying cosmetics that have been irradiated by a cabinet x ray system used for security screening." 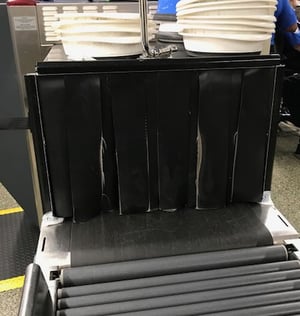 There are certainly a number of health concerns to consider before you travel. After all, just the act of flying in a plane exposes you to relatively higher amounts of cosmic radiation and EMFs. Magnetic fields created by the jet engine, on board electronics & communications, as well as the static electricity generated in the fuselage, might be greater than those you experience on the ground. The Centers for Disease Control and Prevention (CDC) is a good source for the latest research into Radiation from Airport Security Screening. In general, most airports have made great progress in recent years to deliver solutions that provide a high level of security, take into account privacy issues, and protect passengers from possible airport security health concerns.