Wow, your holiday lights are really bright.  Oh no, that's your tree on fire!  Just joking, but it wasn't too long ago this scenario was a much bigger concern -- especially with outdoor or real trees.  Now, more often than not, holiday or decorative lights typically are made from much cooler and safer LED bulbs.  Once saved for use in sensitive electronics or expensive decorative lighting due to their pricey design, nowadays LEDs have become so common place as to have made it into our homes as everyday use light bulbs.

What is an LED Anyway? 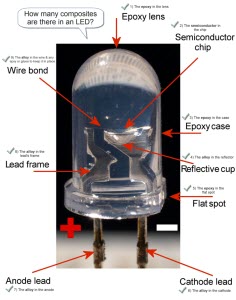 Older, holiday lights usually are incandescent. They create light with a somewhat non-conductive filament or wire strung between two conductors, causing the electrons to slow down enough and create enough energy as to create heat.  Basically, that non-conductive filament between the two prongs inside a light bulb is slowing burning away, like charcoals in a BBQ grill, at relatively low and slow burn.  It's also why we say that a light bulb "burns out." 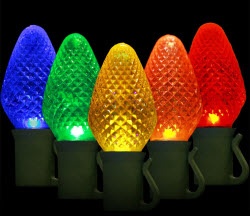 Unlike incandescent materials, composite semiconductors are very efficient at passing those electrons along through the composite material creating energy.   So, the friction created is not strong enough to create heat radiation, only light.  Thus, LED bulbs are cool to the touch compared to old-fashioned holiday lights and won't catch your tree, front porch, wedding decorations, giant papier-mache Great Pumpkin, anything like that on fire.  Although, don't you miss checking all those incandescent bulbs with the strand on to find the one bulb that's out and burning your fingers?  Good times.

(LED holiday lights are so affordable now,
you can deck your house with thousands!)

Why Are LEDs More Affordable Now?

Granted an LED often is still more expensive than an incandescent bulb, but the LED will last years longer if considering them for your everyday lighting.  Despite that fact, LEDs have come down a great deal in price over the last few years because more and more efficient composite semi-conductor materials are being developed and created every day by companies like Globe Composite Solutions.   The studies into graphene and other carbon composite materials for use as semi-conductors are just beginning.  Soon not only will LED decorative lights  with their tiny semi-conductors be the norm, but newer cost-effective semi-conductors will be inside everything from your household light bulbs to your toaster oven.