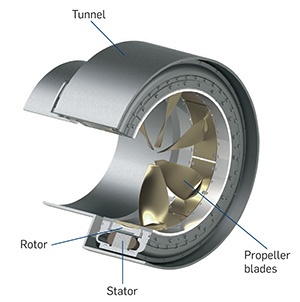 Think of an RPD as a propeller but with the blades attached to the outside surface of a cylinder, instead of attaching to a center hub like a traditional prop. The cylinder ring rotor is surrounded by stators, which creates rotation via electro-magnetic forces. Using RDP technology on a sub has the potential to significantly lower noise emissions, as well as free-up valuable space on the vessel to allow it to conduct other missions as well.

While currently no submarines are reported to use RDP systems, recently there has been some speculation in the media regarding China adopting a Rim-Driven Thruster on its new Type 095 nuclear attack submarine (Chinese designation: 09-V Chu-class). Most of this speculation seems to be based on an interview with Rear Admiral Ma Weiming, from China’s Navy (PLA Navy) on state-run CCTV.

Based on their interpretation of what was said in the interview, Popular Science wrote “These new submarine propulsion systems may not just power China's submarines of the future, but give Beijing a true superpower's underwater armada”.

The South China Morning Post went even further and proposed that “China is now on the cusp of taking the lead in a cutting-edge propulsion technology”.

Despite these claims, no hard evidence exists confirming whether China is near this level of submarine technology. It also seems doubtful that, even if it was true, the official Chinese state media would so openly report on the progress of their secretive nuclear submarine program. Perhaps it is a ploy by the Chinese to counter their reputation of having “noisy” submarines. To that point, a Chinese Shang-class sub was detected by the Japanese Navy earlier this year, patrolling around Japan’s Senkaku islands.

The history of submarine warfare is an ongoing game of cat and mouse, where the hunter can become the hunted as soon as a slight advantage is gained by the other party. Although it is widely believed that the Chinese are at least twenty years behind the U.S. Navy in submarine technology, it always is wise to remain vigilant and alert.