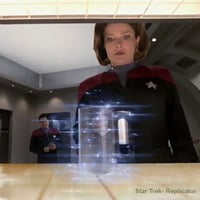 One of the most dynamic and creative technologies these days is Additive Manufacturing, often referred to as "3D Printing". The amazing ability to create solid objects from digital files stored on a computer, was only recently considered pure science fiction. Having a magic box that could manufacture items out of thin air became a familiar concept on shows like Star Trek, where a “Replicator” could produce any item their starship needed. While we are still unable to replicate a gourmet meal or quickly replace the captain’s torn uniform, each year brings us amazing new manufacturing capabilities.

So why can’t we just replicate items as they do on the USS Enterprise? The main reason is we still haven’t invented the Replicator technology seen on Star Trek. On the show, the Replicator works by first dismantling any source object into its universal subatomic particles, then by re-arranging the particles according to a stored template file, recycles them into a new form.

Our current Additive Layer Manufacturing (ALM) process has several ways of working, and more technologies are being developed each year. However, all of them use a specific source material, that is hardened in some way to create layer upon layer of structure, which in the end becomes the finished 3D object described in the digital file. In some cases, the printed 3D object is also the finished product, such as with: a design prototype, a machine part, or a medical implant. In other cases, the printed 3D object serves as a mold or tool, that can then be used to create a finished product. 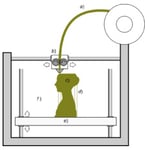 Different Additive Manufacturing Techniques
The source material and technologies used by popular 3D Printers are very diverse.  One of the most popular and well-known methods uses Fused Deposition Modeling (FDM) in which a plastic filament is melted and extruded through a nozzle. The nozzle moves horizontally and “prints” a layer at a time, then moves up slightly and starts a new layer. The FDM method most closely resembles a regular ink printer, with a nozzle that moves back and forth depositing part of a 3D image. Parts are built “from the ground up”, with the 3D object rising from a platform. Because the source material is pushed through a tube, FDM is among the Extrusion techniques of additive manufacturing.

Desktop Metal in Boston has recently developed a new FDM 3D printing system that extrudes metal instead of plastic. After the 3D object is created, it goes through an additional heating process in a furnace to fuse (sinter) the metal particles.

A radically different technique is Stereolithography (SLA), where a platform is dipped into a vat filled with a liquid photopolymer. The 3D object is constructed “up-side down” compared to the FDM method, as the platform is raised a bit for each layer. A layer is created when a UV laser shines through from below the vat and precisely cures a layer of the liquid photopolymer (polymerization). This technique of additive manufacturing is known therefore as Photo-polymerization. 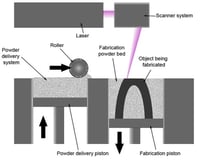 A third popular technique that uses Powder to create a 3D object is called Selective Laser Sintering (SLS or just LS). SLS is like SLA in that the object is formed while surrounded by the source material. While in SLA a laser activates a liquid from below, in SLS a laser melts a thin layer of powder from above. After each layer is created, the powder bed and object are lowered a bit, and a new layer of powder is added to the top. One advantage of this method is that objects are supported by the powder as they are built. For that reason, Laser Sintering does not require any support structures to hold an object.

A variation of the SLS powder technique is called Binder Jetting, where a liquid bonding agent is sprayed onto thin layers of powder. As with the SLS method, after binding the powder on a layer, the build platform is lowered and another layer of powder is added to the top. A soon to be available Single Pass Jetting (SPJ) technique for metal parts, claims it will be "100x faster" and "20x lower cost" to operate than current metal 3D printing systems.

Disruption in Manufacturing Industry
These techniques and many others are beginning to disrupt the manufacturing world. Additive Manufacturing (AM) is quickly moving beyond just creating rapid prototypes, and has the potential of replacing traditional manufacturing methods. This manufacturing disruption seems inevitable for a few reasons.

Firstly, the quality of AM products is improving, and stronger source materials are being developed. In Amsterdam for example, MX3D has developed a robotic 3D metal printer that "draws" a steel bridge in midair.

Another reason manufacturing will be disrupted is that AM can produce complex parts that are not possible to make in other ways. This is very encouraging in the Medical manufacturing industry, where 3D printers are creating everything from patient-specific prosthetics and implants, to “bio-printing” body parts such as skin, bone, and even heart valves. 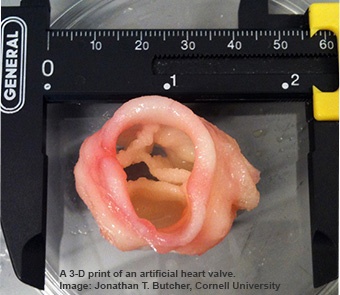 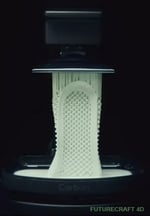 In addition, 3D-Printed products offer a way to quickly bring products to market, to respond to demand in a more agile way. Adidas for example developed 3D-printed soles for its new line of “Futurecraft 4D” athletic shoe. Being able to design how each section of the shoe performs means shoes can be built to fit not just customer size, but their specific weight or other needs. Beyond just shoes, this concept of mass-produced "Individualization" may alter how many products are manufactured.

Adidas has partnered with Carbon to produce the new concept and plans to manufacture more than 100,000 pairs by end of 2018. The CEO of Carbon stated:

"For eons the manufacturing process has followed the same four steps that make up the product development cycle – design, prototype, tool, produce. Carbon has changed that; we’ve broken the cycle and are making it possible to go directly from design to production."

Lastly AM saves money, because no molds, tools or dies need to be created, and production volumes are less of an issue. This is especially true regarding manufacturing spare parts, where maintaining or even finding the proper molds or tools can be difficult and expensive.

The Manufacturing world is in for some incredible changes in the coming years. Advances in Robotics and new composite materials will alter our conceptions of what is possible to produce. While that subatomic particle replicator and a transporter beam are still impossible, nobody can doubt that we are boldly going into a new future where science fiction is quickly becoming fact.

Rethink your next manufacturing project
Globe Composite has a team of design engineers and chemists that can thoroughly assess your needs and creatively design (or redesign) replacement parts using the latest techniques and composite materials to radically improve performance for your company. Globe is well known for its ability to quickly produce functional prototypes. Rethink your next manufacturing project- design with composites and go beyond traditional manufacturing materials If your metal, plastic, and rubber material based parts fail, leaving you with time-consuming and costly problems, contact Globe Composite Solutions.